HomeNewsroomWA Region “You Be The Judge” – Mock Show & Workshop Extravaganza 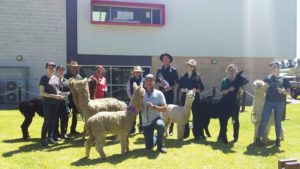 2020 has been a difficult year across the world due to Covid -19. The restrictions placed on gatherings has made it difficult for associations such as the AAA Ltd to hold events and engage members. Western Australian members however, came up with an event that members and potential members could attend and enjoy.

As all the Agricultural Shows and independent AAA shows in the State were cancelled, it was decided to run a mock show with participants judging the animals with an overseeing judge on hand. The concept was to give members an insight into the setup and running of a show, as well as a rare opportunity for a “hands on animals” Judging experience.

Animals were entered by exhibitors prior to the show, and a mock catalogue generated. Once the alpacas were penned by exhibitors the first portion of show day was dedicated to the ‘why’s and how’s’ of setting up and running a show. This included aspects such as Budgeting, Facility Choice, Insurance requirements, Judge Selection and a general explanation of why things aredone in a certain way. The Judging Ring and associated area was then assembled by all participants. This followed a discussion to determine the best general layout for showcasing alpacas to the judge(s), including lighting, shade, sound and marshalling.

Because the day was about education, the stewarding of animals was undertaken by the participants themselves. It provided an opportunity to inspect and confirm animal details against the catalogue, and for compliance to show requirements prior to judging, That is – Teeth, Tag, Tail, Testes, Colour etc.

Jenny Jackson was the Overseeing Judge for the day, and had the final say in placings. Sophie Stacey in the role of Chief Steward, also helped guide participants along the way. Recognition was given to Jenny’s vast experience, and the fact that a judge takes time away from their life to add value to the industry, and more specifically each event, such as this show. “You be the Judge Extravaganza” attracted 50 animals, 25 participants and 14 ‘judges’ for the day. Included in this was 4 youth participants, who were well supported by members to get in amongst it and have a go.

The format of the show was simple. Each section of the show was judged by a paired couple. The sections allocated to each pair was listed in the catalogue, based on request made on the entry form. Jenny would then oversee and provide whatever level of support the participants required or requested, thus catering for all skill sets. Ribbons and championships were given, as per a normal show, with Jenny generally giving orals on the classes and sections based on the participants reasoning. Some of the more confident participants gave their own oral reasoning. Each judge of a section was awarded a ‘Champion Prize’ for participating and these prizes were kindly provided by the participants themselves.

During the judging process, Jenny spoke generally and specifically about many aspects of alpaca, shows and judging. A myriad of topics was covered over the day, imparting a wealth of knowledge to the attendees. This was given in a serious yet fun way, ensuring all had an enjoyable time, yet learnt  a lot along the way.

The show wrap and clean up included a sausage sizzle kindly donated by Jane and Danny from Honkynut Hill. 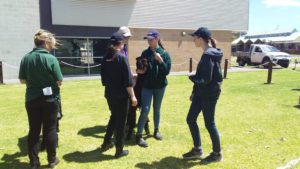 Possibly the most important part of the day however is recognising the work and effort put in both prior and during the mock show by members.

We hope as an organisation we can get to run similar events in the future, showcasing alpacas, and engaging members both old, new and potential.