The Western Australian branch of the AAA holds an ‘Alpaca of the year’ competition each year (Not to be confused with the AAA Alpaca of the state).

Scores are gathered from all five AAA shows in WA over the year, and this year the trophies went to Futura Iconic (Huacaya) and Bedrock Comic (Suri). Congratulations to both breeders. “Selecting Blackgate Lodge Snowmaster to breed with our Supreme winning female Futura Heirloom resulted in Exactly what we hoped for. Future Iconic was destinedfor recognition and his show results have not disappointed. Numerous age Championship ribbons at all WA shows, as well as four Supremes have made us proud owners of this special male.

Iconic’s progeny are now hitting the ground (all males to date) displaying those qualities we aim to breed.”

“As the name suggests Comic makes us laugh a lot.  He likes to sunbake on his back with his legs in the air like a dog. When teaching him and others to lead I would tie them all up in a row. One by one take them for walks down the driveway, only to find on several occasions he would have untie himself and others while I was away.  He has a lovey quite nature and is a pleasure to do anything with.

Comic won WA Suri of the Year despite being eligible to show, in just three out of our five shows.” 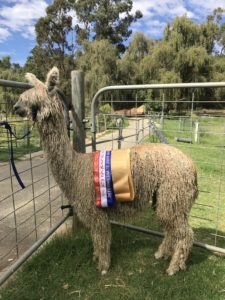 Comic is the third male out of BedRock Concise to win Suri Alpaca of the Year.

2019 Runner up State Alpaca of the Year – AAA Competition